At the ON Power Geothermal Park, every endevour is made to discover new and diverse ways to utilise thermal energy, electricity, water, and geothermal gases from the Hellisheidi Geothermal Power Plant, in the municipality of Ölfus. The use of various energy streams from geothermal utilisation can increase efficiency and strengthen environmentally friendly operations and innovation in the business community. Energy-related natural resource streams are utilised for the Geothermal Park's operations. 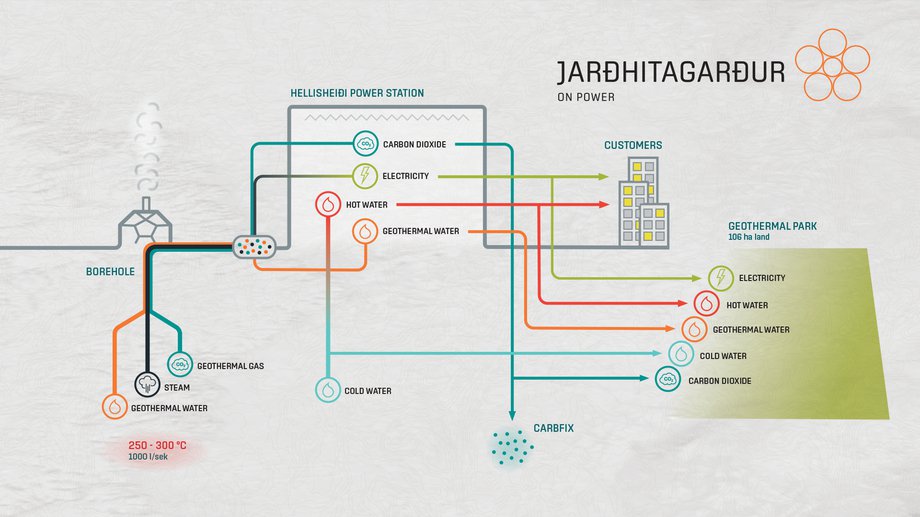 Overview of energy related convection of natural resources at the Geothermal Park at the Hellisheidi Geothermal Power Plant.

A good example of efficient use of natural resources can be found at the Swiss start-up company Climeworks, which utilises various energy-related resources. Currently, in collaboration with Carbfix and ON Power, installation of air filtration fans in ON Power's Geothermal Park is underway. The direct air capture units (DAC) will filter 4,000 tonnes of carbon dioxide out of the atmosphere yearly, and mineralise it in basaltic bedrock. Furthermore, the international start-up company VAXA (f.k.a. Algaennovation), utilises energy-related resources in its microalgae facility at the Geothermal Park. In addition, the company GeoSilica uses separated water from the plant in its production of dietary supplements. A considerable amount of carbon dioxide is a byproduct when electricity is produced at Hellisheidi. Numerous start-up companies have shown interest in using carbon dioxide and other by-products from the power plant.

ON Power has been conducting an experiment, by producing hydrogen at the Hellisheidi Geothermal Power Plant, as it participates in the developmental project, Hydrogen Mobility Europe, which is under the auspices of the EU. Energy production at the power plant is utilised for hydrogen production, during off-peak hours in electricity consumption. The hydrogen is intended for the public and the business community, as part of the green transformation of transport.

Strict requirements are imposed on companies that intend to operate in ON Power's Geothermal Park, with regard to water protection, appearance, disturbance and reclamation. Companies are required to re-use any vegetation, disturbed during the construction phase of their projects. They must either replant the vegetation or utilise it elsewhere.