Various research and development projects have been conducted in recent years to fulfil reinjection requirements at Hellisheidi and Nesjavellir, with considerable success.

Despite the great success of the reinjection system at the Nesjavellir Geothermal Power Plant, energy production is nevertheless accompanied by substantial discharge of heated groundwater at the surface. Groundwater has been extensively monitored in the past by recording boreholes and hot spring temperatures in real-time, and samples have also been collected since the power plant began its operations in 1990. The results do not show a decrease in groundwater temperatures, despite less discharge. The reasons behind these findings are not clear, but could be attributed to the following:

Increased supply of geothermal water to the capital area

The capital area, except for Kjalarnes and rural Mosfellsdalur, was supplied with hot water from geothermal power plants for up to three months, during the summer of 2020. Going forward, the aim is to decrease production from low-temperature geothermal fields during the summertime, in order to further utilise the energy that is produced in power plants.

Impact on the ecosystem

Monitoring the ecosystem in the bay Þorsteinsvík, in the lake Þingvallavatn, began before the Nesjavellir Geothermal Power Plant was built. The results of measurements, made by the Natural History Museum of Kópavogur, show that trace elements from geothermal water, previously considered to have a negative impact on the ecosystem, do not show a statistically significant increase.

Analysis of the status of groundwater at Nesjavellir will continue, in order for ON Power to achieve its objective of reducing the environmental impact of the Nesjavellir Geothermal Power Plant. 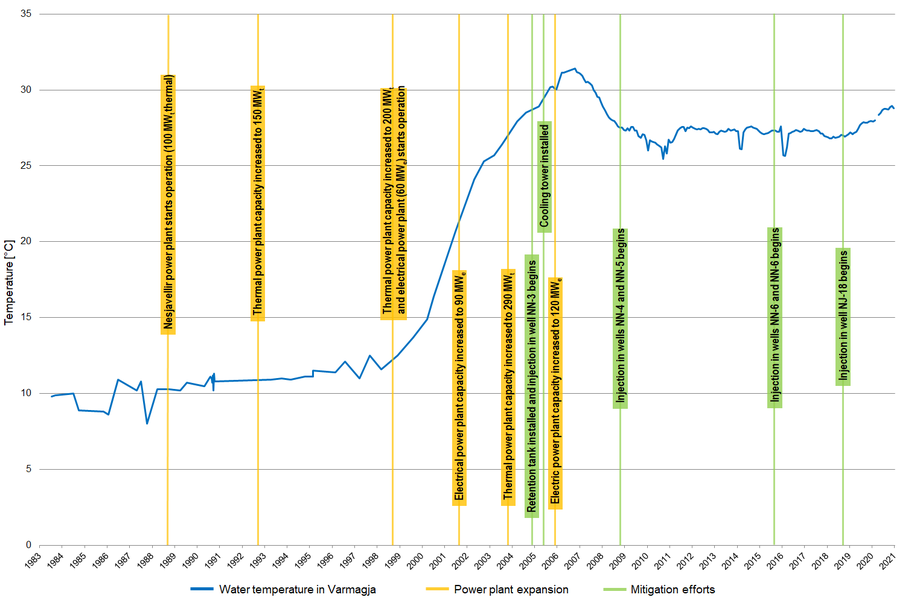 Water temperature at Varmagjá at Þingvallavatn, the development of the Nesjavellir Geothermal Power Plant and mitigation measures

The reinjection of geothermal fluid can cause seismic activity, known as induced seismic activity, or triggered earthquakes, especially at the Húsmúli area. Blasting, associated with geological research and drilling in high-temperature fields, may also be the culprit. ON Power follows procedures, that are designed to minimise the risk of triggered earthquakes at and around the Hengill area.

Two earthquakes over the magnitude of 3.0 struck the area in 2020. An earthquake of magnitude 3.7 was recorded roughly 4 km north-west of the Hellisheidi Geothermal Power Plant in February 2020. The tremors were widely felt. No changes in reinjections procedures had been implemented before this earthquake occurred. In November 2020, an earthquake of magnitude 3.3 was registered below the reinjection area at Húsmúli, and this was the largest earthquake that had hit the area since September 2016. The earthquake was felt in Hveragerði, Eyrarbakki, Selfoss, and in some parts of the capital area. Due to the location of the earthquake, and the fact that no changes had been implemented during the process of reinjection of geothermal water prior to its occurrence, it is believed that it was caused by release of tension in the bedrock, which prolonged production and reinjection may cause. A notification was sent to licencing authorities, other stakeholders and the media.

In 2020, no notifications were sent to the Icelandic Meteorological Office's seismic activity division, or the Department of Civil Protection and Emergency Management of the Icelandic Police, due to changes in the process of reinjection.